Last year I read “The Warmth of Other Suns” and it floored me. As discussed in my review of that book, I’d previously struggled with understanding the urgency and direction of much of the #blacklivesmatter movement. “The Warmth of Other Suns” brings to vivid horrific life the Jim Crow era and its continued echoes into life today for Black Americans. And perhaps “echo” is too soft a word since, for many, it manifests more loudly and clearly like a gunshot, siren, or slammed door. My point being that, after finishing that definitive account of the black exodus from the Jim Crow south, my heart was opened to the very real psychocultural and emotional history felt by many black americans today who still have family members that experienced this multi-generational subjugation and institutionalized hatred.

As I listened to Yaa Gyasi’s “Homegoing” (on Audible) I began to see the very clear narrative line that she was drawing between black lives today and an origin story across the Atlantic that began centuries ago. This masterpiece of historical fiction follows the lives of two separated half-sisters (and their six generations of descendants) beginning in the mid-1700 area of West Africa today known as Ghana. Gyasi uses their two very different paths to highlight not only the horrors of the slave trade but also the bravery and determination of the many who persevered and survived across the span of time. Many critics (e.g., the New Yorker and the New York Times) call out Gyasi for not giving the generations of American characters that she describes enough autonomy and instead charge that she reduces them to caricatures whose destinies are at the mercy of the institutions, laws, societies, and culture in which they find themselves. These critics are wrong and too cantankerous--for most readers these sections of the novel will instead read as ringing endorsements of the courage and grit displayed by these characters DESPITE their circumstances. Ultimately, in “Homegoing”, the 25 year-old (I mean wow!) author accomplishes a breath-taking feat in creating a compelling history of slavery told through 14 sequential short stories that you likely ever forget. 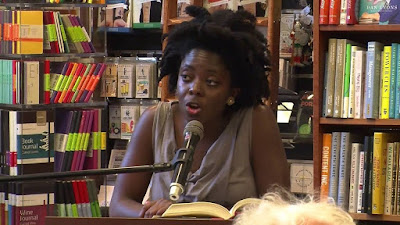 “Everyone was responsible,” James tells the village. “We all were . . . we all are.”

“We believe the one who has power. He is the one who gets to write the story. So when you study history, you must ask yourself, Whose story am I missing? Whose voice was suppressed so that this voice could come forth? Once you have figured that out, you must find that story too. From there you get a clearer, yet still imperfect, picture.”

“You cannot stick a knife in a goat and then say, "now I will remove my knife slowly - so let things be easy and clean; let there be no mess." There will always be blood.”

“No one forgets that they were once captive, even if they are now free.”

“When he was young, his father told him that black people didn't like water because they were brought over on slave ships. What did a black man want to swim for? The ocean floor was already littered with black men.”

https://www.nytimes.com/2016/06/12/books/review/isabel-wilkerson-reviews-yaa-gyasis-homegoing.html
Written by JK3 around 1:07 PM