Kruse's Keys: Read "By Night the Mountains Burn" to Experience Survival on the Margins (Equatorial Guinea)

Equatorial Guinea is the only Spanish-speaking country in Africa (following 200 years of Spanish rule)--it's also the richest African country you've never heard of per capita (due to the discovery of oil there in the 90's).  The level of wealth, however, has been rather opaque due to the brutal dictatorship of "President" Obiang who took power by staging a bloody coup against his own Uncle in the late 70's.  Exxon has run most of the country's oil production so despite flagrant human right's abuses, the country has had an on-again-off-again relationship with the U.S..

"By Night the Mountain Burns", however, takes place back during the colonial era on one of the country's neglected islands--the country itself is run from its capital city Malabo on its largest island called Bioko.

It's important to consider the subject matter and themes authors like Laurel choose to address.  A frequent critic of Obiango, the self-exiled author tells a tale in this novel of a marginalized community that survives (sometimes) on the narrowest of margins depending on passing European ships and a strange periodic washing ashore of squids. Life on the island revolves around the ocean and the canoes which the entire community bands together to create and which men are buried in when they dide.  Superstition also plays a central role as the villagers brutally murder one woman for her suspected role in a fire, and later cholera decimates the population.

To my knowledge this is still the only work of fiction available in English from Equatorial Guinea.  The author has since then written about migration in northern Africa (The Gurugu Pledge

) and I look forward to more contemporary novels in the future from this small nation. 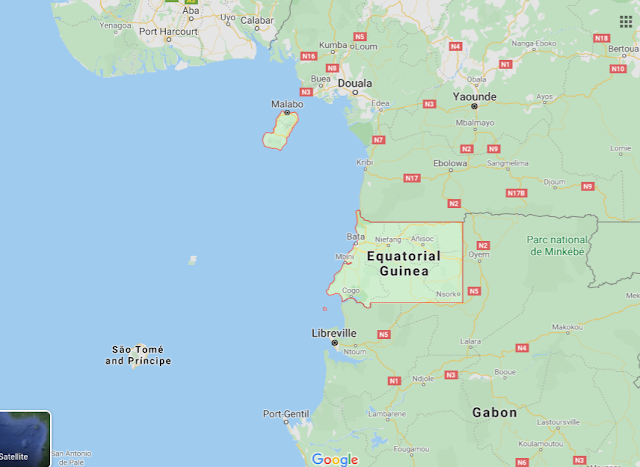 HRW: the 40th Anniversary That Shouldn't Be: Obiang